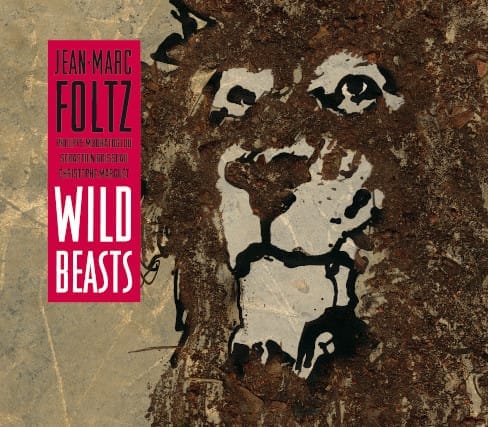 No one has electricity here, as the music penetrates walls. It is music of the enchanted forest, far-removed from the mileposts and navigation markers that restrict lands, guide sailors and sometimes even lead tall ship captains astray. Jean-Marc Foltz’ composition is meticulous and, reunited once again, the band still improvises for all types of weather. This ensemble breaks the rules and strives for fantasy chamber music that they invent as they go along. It is quite rare and quintessential. Unique enough to attract attention, the musical expedition they recount here is natural and animal in character, but also represents the collaboration of a group and musical family that formed more than ten years ago, fourteen to be exact.
I am the animal. No, you are. These are the images of photographer Nicolas Bruant at the source of the musical portraits composed by Jean-Marc Foltz on this album. The palpable cinematography of these imaginary animal treks, conjured one after the other, is conveyed in adventuresome music that transcends a simple series of juxtaposed images. They had to be tamed one by one by experiencing their power individually and exploring the strength that animated them to create a journey of sound that would exalt them. I am an animal yet quite something else whenever I choose. Speaking of nature and humanity here, I create, I sing, I tell stories, I convey a faraway wild Africa and I call to mind far-removed masters of music without divulging their names: that is it. While Viracochas, the quartet’s first album in 2013, conjured the Andean gods inhabiting rocks, Wild Beasts also conveys the spirit of the divine all around us, in the inexpressible space between human and animal and in the poetic channel that perpetually connects one to the other, while still separating us.
Trying to recount one’s own musical story within the larger context of contemporary music remains an ongoing challenge at every turn. The long-term commitment behind the Vision Fugitive label allows every one of its musicians to carve out and follow their own path, without restrictions and at their own pace.
In this new project, still the same at heart yet totally different, Jean-Marc Foltz confirms the quality of his composition, imprinting it with fantasy and spirituality, as well as the commitment to a flawless rhythm drawing on the roots of Africa and a very distinctive sound, which is undeniably unique!
Stay open to attack with the delicious nibbles of the Wild Beasts narratives and relish your first wild ride. Listening to them with headphones is the best bet. Or, get the next best thing by driving a convertible 4x4 at breakneck speed through South Africa’s Kruger Park.