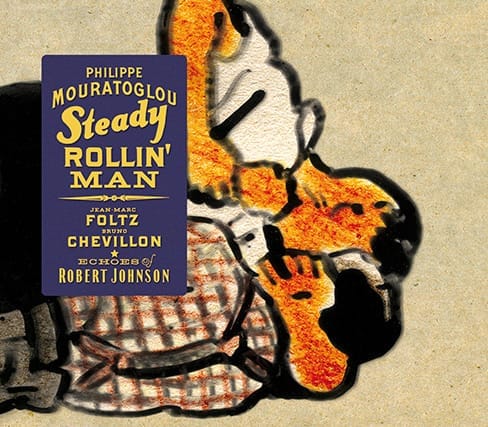 As I listened to the recordings of blues guitarist Robert Johnson, I was struck by the utter originality of Johnson's language: creative and almost strange. I was impressed by his remarkable virtuosity in the blending of an elaborate guitar playing and a very original way of singing.


I was touched by this music, that was recorded in extremis, and I wondered what it might have become if Robert Johnson had had the opportunity to develop it further. To imagine this potential evolution gave me the first impulse. During a solo guitar recital I included a couple of Johnson's tunes, just to see… see what it would sound like to play the blues, while not really coming from these roots. To start from this blues that's so singular and then to discover a new angle and different perspectives.


Playing the guitar confronts one with a certain kind of loneliness. Nonetheless, for this project, I decided to look for traveling companions: musicians without aesthetic prejudices, ready for this adventure, and eager to see where it would lead us. Jean-Marc Foltz's and Bruno Chevillon's names came as natural choice because of our affinity, friendship, and the fact that we think and feel on the same line. Also because we had the same desire for creative complicity. The aesthetic area of these two versatile musicians is far from the blues of the origins, and this was supposed to help me take some distance from this subject matter. The latter, in return, was meant to make each one of us question his musical habits.


I thought of the double bass as a complement for the guitar, that would form with it some kind of an extended string instrument and would at the same time be able to produce specific sound textures. I heard a clarinet that would answer my voice, somehow like an ambiguous reflection of it, like some sort of an alter ego that would conjure up the "diabolical" mythology that's associated with Robert Johnson.


The clarinet was also meant to bring in a wealth of abstract and evocative colors. As for the guitar, I was looking for something I had never done before. I decided to work on the same type of open tunings that Robert Johnson used. This made me discover new possibilities and specific sound colors.


I wrote music for this project and I also wanted us to improvise, so as to maintain a space that would reflect the inspired freedom that is so striking in Johnson's music. The blues includes something unsolved, a dimension that remains open: that's the way I feel about it.

Hence the idea to work around Robert Johnson.

A stylistic copy of what has already been done wouldn't mean anything to me.

Robert Johnson, the loner, left a print in our memories and it can ring within us, whatever our origins may be. In its own way, this trio imagined a continuation of this imprint.


"This is not really blues, this is something else. Echoes of Robert Johnson".