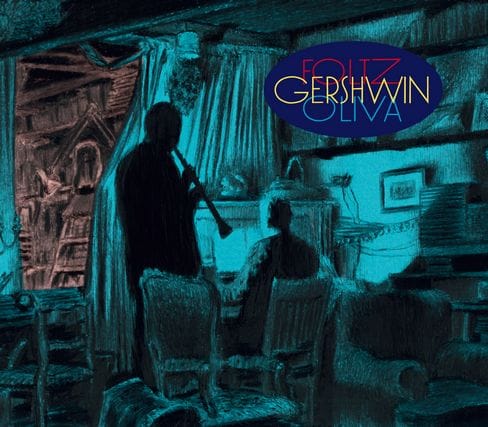 Clearly, a George Gershwin tribute recording doesn’t just come down to a selection of celebrated standards played by accomplished musicians emulating his style. More so than with any other repertoire, a deep understanding of his rich harmonies, keen awareness of his history – making music that never gets old sound new again – and singular savvy to eschew every jazz cliché in the book while respecting tradition is paramount. Clarinetist Jean-Marc Foltz and pianist Stéphan Oliva have been cultivating these three distinctive qualities for over a decade. Befriending the cold shadows of one of contemporary music’s most passionate composers Giacinto Scelsi (Soffio di Scelsi, 2007), rephrasing the myth of Pandora (Pandore, 2008), and boldly rediscovering classics for clarinet and piano (Visions Fugitives, 2011).

Simply entitled Gershwin, this CD continues a longstanding dialogue and conversation that is in concert with a piercing focus on silence that plays the arbiter of panache. Slam and jam fans are respectfully requested to move on to the next new thing. Drawn out like deft Oriental script, this music seems to spring from silence to give greater vision and voice to breath. The breath of life that, according to ancient mystics, set the world in motion at the beginning of time. Simple yet complex, the aesthetic challenge is to loosen up the tempo without losing the rhythm and stretch out the phrasing without shattering the phrase. Ultramarine blue harmonies, ample and adept use of melisma as well as its own particular brand of sex appeal make George Gershwin’s repertoire a dream machine. On this side of the Atlantic where musicians and music lovers alike are forced to choose camps, we have too often and too long forgotten the success of Gershwin in straddling the worlds of both the classical music of his era (Rhapsody in Blue, Concerto in F) and popular Broadway showtunes that gave him an in with the jazz crowd. We also fail to recall that this instantly charismatic song plugger often fraternized with Arnold Schönberg and indeed idolized Alban Berg. Whereas, it was undoubtedly Maurice Ravel who, refusing his repeated requests for composition coaching, already recognized a burgeoning genius and encouraged him to find his own path rather than follow by example, as Nadia Boulanger also perceptively did with young Astor Piazzolla years later.

The best teachers are those that encourage their protégés to fly solo and the defiant loyalty that Foltz and Oliva show Gershwin is right on the mark. You will hear no trace of the astonishing glitzy clarinet glissando intro in this reinterpretation of Rhapsody in Blue while skillful layering of secondary themes and counterpoints express the true essence of a rhapsody. Just as in unforgettable Summertime, where the sequence in Prelude no. 2 resonates with the golden link between the ‘classical’ and ‘jazz’ Gershwin that has only ever been broken in the narrow minds of territorialists. And, as in the playful and carefree stylings of Fascinating Rhythm, syncopated by the infusion of Thelonious Monk eccentricities.

Their flair for eloquent silence, and reverence without deference, repeatedly conjures up the unlikely pairing of Chet Baker and Paul Bley on their breathtaking Diane album of 1985 as well as the familiar ‘crosscurrents’ of Lennie Tristano and Jimmy Giuffre, even echoing the historic encounter between Duke Ellington and John Coltrane.

Walter Benjamin’s cherished ‘angel of history’ takes a chosen few under its wing who, at any given moment, may elect to amplify silence rather than string together notes in an appealing arrangement because, after all, music lives and breathes until the very end.