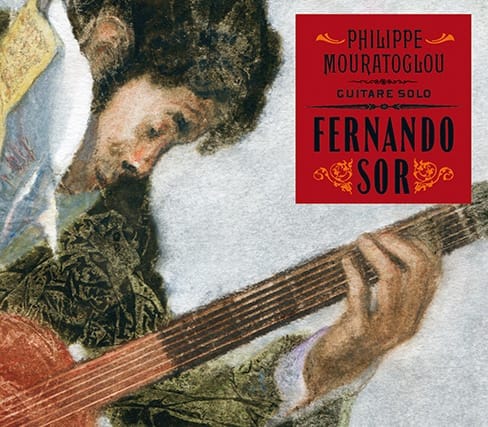 When Fernando Sor was born in Barcelona in 1778, the guitar was undergoing its most profound organological changes in almost two centuries. While the baroque instrument featured five double strings (plus a single high pitch treble string) and ‘re-entrant’ tuning (the lowest register string being the third or fourth instead of the fifth, depending on octave or unison tuning), the late 18th century guitar did away with the double strings and added an extra bass string. This all occurred during the Enlightenment period, when mistrust of past conventions and the former regime were the rule. Having fallen out of favor for quite some time, the baroque guitar was rejected during this revolutionary new era, as was the lute and subsequently the harpsichord. The popular choice among amateurs until then, tablature notation was also deemed outdated and overly complex. Simply put, during young Fernando’s formative years of musical training in the strict environment of the Montserrat Monastery, the guitar again became the bourgeois street instrument it once was before Louis XIV decreed it a mark of noble distinction, prized by the aristocracy. Although Fernando was considered a musical prodigy, his penchant for such an unsophisticated instrument played solely by philistines was inconceivable. However, in an almost underground fashion, he put pen to paper and composed his first opera, Telemaco, in 1797 to great acclaim.

You must keep in mind the sociocultural setting at the time to fully grasp how Sor’s œuvre, often mocked as ‘salon’ music, was first and foremost the fruit of the personal persistence and strength of character that sets artists battling the prejudices of their time apart. Even when circumstances were sometimes outside his control, Sor still managed to flourish in a world fraught with war and left Spain permanently when Napoleon’s troupes were defeated in June 1813 at the Battle of Vitoria. Paris was the natural choice for him, as the guitar became so popular there that the term guitar mania was soon coined to label the phenomenon. Catching the romantic fever, the city of light attracted musicians from far and wide and guitarists were not the last to try their hand, as Ferdinando Carulli, Francesco Molino, Dionisio Aguado and still others also made good in the capital. Transcending social class and prompting friendly admiration, fierce contests and bitter rivalries, the modern ‘classical’ guitar then evolved from this intensely competitive environment and, circa 1850, luthier Antonio de Torres actually introduced the standard shape we know today. Ruled by the need to please, the repertoire placed great emphasis on variations of operatic arias, little effort was made to improve on guitar technique overall and even less attention was given to expression. Carulli, Carcassi and Giuliani left behind some charming, well-crafted compositions, however nothing like the masterpieces from the piano pioneers of the same period. This scenario contributed to creating a distinct classical guitar microcosm, scorned by condescending music connoisseurs and musicologists alike. And it is not clear whether the efforts of Andrès Segovia in the 20th century to promote the guitar as a serious instrument completely stamped out this negative reputation. However, the unwavering and unflappable Segovia did firmly establish an almost obsessively conservative approach to the instrument and repertoire that could not break free of that constraint until after his death.

The pre-romantic guitar would not have had such a significant voice in music history were it not for the allegiance and dedication of such an exceptional man like Fernando Sor. Needless to say, you don’t have to be an authority on pre-romantic guitar to fully appreciate his impressively original expression in even the simplest of compositions. Not at all averse to success or accolades, Sor did indeed accept his circumstances (experiencing the highs and lows of exile in London and Russia before returning to Paris in 1826), but a singular quality distinguished him from his contemporaries: his refusal to take the easy route. In his case, the refusal was ethical as opposed to technical, as many of his instructional pieces, though not particularly difficult to play, almost always include an element of surprise, unanticipated modulation or unexpected phrasing. Philippe Mouratoglou quite appropriately points out the irony that these invaluable discoveries appear more often in his Etudes than in his “grander” concert compositions, “in which highly inspired passages are mixed with elements that are clearly more conventional in nature.” That should hardly be surprising from a man who gave his best to teaching and whose instructional pieces were much less a ‘side hustle’ than a true raison d’être.

Like every great master, Sor learned by teaching. The notes on technique he wanted to illustrate with any étude or lesson melt away into unconcealed musicality and graciously fade with the power of voice. Although he didn’t compose much vocal music, we do know that Sor had a lifelong obsession with bel canto, a passion also shared by the far more famous, contemporary instrumentalist and composer, Frédéric Chopin. Given his fixation on voice as the archetype of instrumental aesthetics, it wouldn’t be an exaggeration to say that Sor’s most exquisite études are to the guitar what Chopin’s are to the piano: principles of technique that help you forget about technique. When satiated with the same intensity as Chopin or Sor, this zeal for the vocal line offers harmonic structure a new-found freedom, making the boldest modulations sound as pure and natural, clear and apparent as can be. Although not venturing as far into enharmonics as Chopin, Sor’s ability to elucidate a single melodic cell with a variety of harmonies, or to write a melody in a major key then arrange it in a minor key, truly sets him apart. Clearly, the penchant for bel canto reigned supreme for all period musicians and music connoisseurs, however, Bernard Piris so aptly recounts in his esteemed Sor monograph how this passion for vocality also stifled inspiration for struggling artists while stimulating the best. “It’s true that Italian melodies are often quite beautiful and, at best, appealing when they are skillfully composed, making the guitar sound in effect like a violin, but exclusively relying on vocality has one major drawback in that composition technique must be adapted to allow for contingencies and the idiosyncrasies of the instrument. Having left behind a number of very remarkably balanced and refined smaller pieces and études, master of melody Giuliani (…) only gave us one larger, tedious and traditional piece, failing to ‘dot the i’s and cross the t’s’ in his Grand Overture op. 61. (…) On the other hand, Sor was very good at addressing repetitive motifs, which would be insignificant had he not enhanced and highlighted them with cleverly composed harmonies or counterpoints whose secrets are his alone to keep. 1.” Fernando Sor was truly a man of his time yet, like all artists whose work transcends time, he was also a tenacious outsider who preferred both the joy and pain of solitude to the punishment of the conformist scenario that was more readily appealing to his less principled contemporaries. Likewise, Sor did not resign himself to the very popular variations-on-operatic-arias trend, with the notable exception of his Opus 9, Variations on O Cara Armonia by Mozart, which was such a résumé of his ingenuity and testimonial to his endless fascination with The Magic Flute that it was thought to be compelling evidence of his adherence to the Freemasonry ideals that had rallied a large number of his fellow musicians. Much more than a history lesson, this six-page opus isn’t as extemporaneous as it might seem, as it required the composer to focus all his skill on relinquishing any technical pretext in favor of mastering expression.

These are the same high standards that guided Philippe Mouratoglou in selecting pieces for this new CD release. “The final repertoire for this CD wasn’t due to my desire to uncover rarely performed pieces or other unknown masterworks by Sor but rather to offer a selection of my favorites (all from my youth, except for Calme) and push the interpretation as far as possible. Likewise, my references weren’t classical guitarists from the past, but rather pianists such as Sviatoslav Richter, Martha Argerich, Arturo Benedetti Michelangeli and Claudio Arrau, though I still embraced the work of other Sor interpreters, like Andrés Segovia and Roland Dyens, for their sound imprint in particular.”

Similarly, his choice to interpret these pieces on a modern instrument, as opposed to a Romantic period guitar, is totally warranted because of the breadth of nuance and resonance it can produce. In his very insightful Histoires de Peintures [The History of Painting], Daniel Arasse asserted that art historians shouldn’t be afraid of being anachronistic, as art is always contemporary to the modern-day audience 2. The same applies to interpreters who, without underestimating the merits of a historically informed interpretation and the magnetic charm of period instruments, still choose to play Fernando Sor, Benjamin Britten or Toru Takemitsu on a modern guitar. The challenge is to learn how to borrow their tonal color, articulation, diverse dynamics and essentially everything that eventually produced the modern guitar, if an in-depth understanding of period music is the goal. Having sung the bittersweet praises of Sor while still lamenting that he played an instrument as unglamorous and unsonorous as the guitar of his time3, the almighty critic Fétis would undoubtedly have stopped crowing if he could only hear the way this music sounds on a modern instrument, as interpreted by an adept player who is able to exhume the enduring quality and harmonic opulence of Sor, employ the full range of resonance that modern technique has to offer and then convey it exquisitely on a sound recording.

Seductively familiar on the surface, Sor’s music is in many ways like his last remaining self portrait, capturing an ironic half-smile that kindly conveys the commitment to remain an outsider and the illusion-free fire of all artists who have consciously chosen integrity over greatness. And one that still imparts a generous share of his divine madness•